This site uses cookies to enhance your web site experience. By continuing to browse or use this site, you are agreeing to our use of cookies.
Learn more

It's time to Believe in yourself 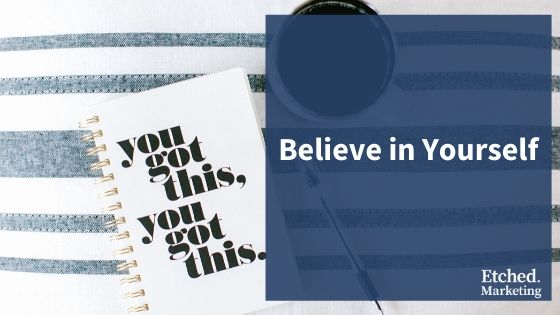 I see you, mama. I feel you. You want to leave corporate behind, but you're afraid you can't do it yourself. It would be best if you had the security of that paycheck every other week. You like knowing exactly what's coming into your bank account. Maybe you're the one supporting your family, and you don't feel comfortable taking a risk with something as important as your family's income. I get it. I understand. Boy, do I. I was single for many years. I was laid off from my corporate job twice in three years due to the economy. Both times I was laid off, I was single and had a home with a mortgage payment. It's scary. I stayed in the corporate world for years, even though it wasn't all that steady, it felt safer.

It wasn't until I was laid off for a third time that things changed for me. For one, I was going through a third corporate layoff in less than 10 years. My dear, sweet husband pointed out that my corporate career wasn't as secure as I liked to think it was. I mean, he's not wrong. None of the layoffs were things I could control. They were economic decisions.

#1 – December 2008, otherwise known as the heart of the great recession. I was in marketing at a non-profit, and our donations were down more than 30%. They laid off 30% of the staff the last day before Christmas break began. Side note, if you ever get invited to the company Christmas potluck, you might want to take note, especially if the Christmas party was somewhere great the year before. I lucked out and found a great job with 90 days after this and stayed for several years, leaving when I was ready to move on to the next challenge.

#2 – January 2012, not recession-related but a rather unscrupulous company. I joined an organization to become their marketing director and knew I'd made a mistake on day one. Unfortunately, what I didn't know was viewed my role as a temporary one, even though they did not advertise it as such. I asked for more money than they initially offered during our negotiations, and they agreed to my request, pending a positive 90-day review. I had no worries; I've never had a poor review in my life. And on day 87, they told me they sold the brand and wouldn't need me any longer. It turned out that it was a lie. They still own that brand today. But I was still out of a job. Again, I lucked out, I was back to work within 60 days, making more money and stayed with that company for almost five years.

#3 – November 2016, the company I joined after experience #2 was a good one for many years. There were a lot of economic ups and downs due to a pretty bad acquisition, clients leaving, cash flow issues, etc. but for the most part, the worst the team felt was that we were chronically short-staffed for pretty much the entire time I worked there. As a result of the economic challenges and bad acquisition (they kept the staff, inherited much more debt than disclosed initially and lost all of the clients) they ended up selling the company to a large investment firm that laid off a lot of middle and senior managers about 60 days after the merger. This is about the time my husband pointed out that my corporate career wasn't as stable as I liked to believe it was.

I took the chance on myself. I thought about going back to the corporate world after that 3rd experience, but I also looked around and realized how much my life had changed in 8 years since the first layoff. How much I had changed as a person. That girl who was laid-off in 2008 was scared. She was out on her own with a mortgage to pay. She wasn't making a ton of money yet, but she was working hard and climbing the ladder and looking to grow. The 2012 version was earning 50% more money than the 2008 girl, and she was more comfortable in her career, she was in grad school working on her MBA and ready to move to the next level, and she was just about to meet the man she would end up marrying. Yep, I met my hubby while I was unemployed.  The 2016 version was making more than double what that girl was in 2008 when it happened. She was a Senior Director, waiting for a VP title to come through next. But she was also now married and had a son who was 16 months old, and as she started interviewing for new roles, she realized that her priorities had changed. I didn't want the VP title as bad as I wanted to have time with my son while he was young. I didn't want to go back to traveling frequently and missing events at home as had happened so many times over the past 10 years.

It took a lot of thought and reflection and way more courage than I thought I had, but I chose not to return to the corporate world and instead chase a dream that I'd had since 2004 and go out on my own. Yeah, I was dreaming of starting my own business long before I joined that non-profit in 2007. It took me 12 years and 3 layoffs to chase my dream.

Please don't wait as long as I did.

Go for it. Believe in yourself. You guys, you can do this. If you're afraid of giving up your income today, then start it on the side. Build it slowly. You can start a business in a few hours a week. I know you can. You can sustain one on about 2 hours a day, trust me because that's what I've been doing since my son's preschool closed for Spring Break on March 6th. As I write this email, we've been at home together for 12 weeks now. We're in a good routine now, but I would love a bit more work time each week. We'll get there. If you're wondering how you could find the time, check out this blog post on building your business in a couple of hours a week. If you're starting to think about it and you know you don't have time to waste and want a fast-track, step-by-step guide to building and marketing your new business, I'd love to have you join me in the Business Builder's Blueprint. I've created the course that I wish was there for me in 2016 when I started my business full-time. I'm teaching you everything I had to figure out on my own to get to this point. And what is this point? I'm sure you're curious if you can make money working for yourself, I know that was one of my main concerns since I could go back to corporate for 6 figures immediately. Yes, you can earn money working for yourself. I make more than I did at many points in my corporate career, and I work from home on my schedule. It is possible. Dream big and believe in yourself because I promise you, I don't have a secret that made it work for me. I just kept doing it day after day, even on the hard days. You've got this.

If you've got a dream in your heart, it's time to start building your dream. If you know you want to do it but aren't sure what to do, start here, request your copy of the Business Builder's Guide, and decide what type of business you're going to build. That's step 1 on the path to success.